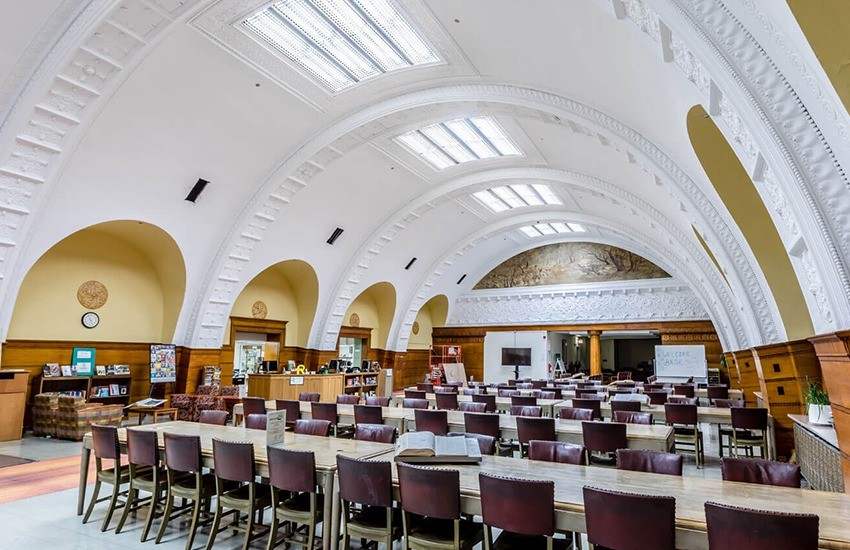 The Murray-Green Library at Roosevelt University is located on the 10th floor overlooking Lake Michigan and Buckingham Fountain, which is the “Crown Jewel” of Chicago. Today, the building is a National Historic Landmark, and the achievement of famed architects Dankmar Adler, Louis Sullivan and young Frank Lloyd Wright as a draftsman. On October 5, 1887, President Grover Cleveland laid the cornerstone for the Auditorium Building. The 1888 Republican National Convention was held at the partially finished building, where Benjamin Harrison was nominated as a presidential candidate. It officially opened in 1889 and was immediately acclaimed as one of the most beautiful buildings in the world. The structure is dressed with Romanesque-style architectural detailing and constructed with thick load-bearing walls. When completed, it was the tallest building in Chicago and the largest in the country. The cost of the Auditorium reached above $3,200,000, making it the costliest building in the city at that time. The Auditorium’s fortress-like exterior echoed the strength and power of its purpose. The simplicity and boldness of the exterior is contrasted with the intricate detail and design of the building’s interior. The interior is lavishly decorated with marble, mosaics, art glass, murals and plaster reliefs in organic ornamentation.